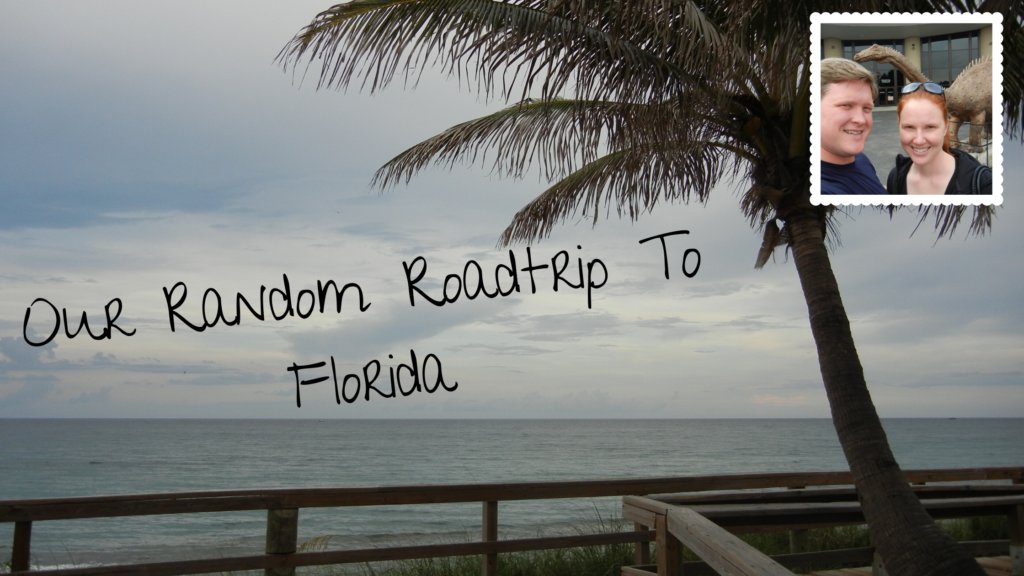 Our Random Road Trip to Florida

Speaking of road trips last week – This got me thinking of an adventurous memory Michael and I had our first year of marriage. Our grand plan was to go to Iceland until we sat down with a travel agent and found out it was going to cost $10,000! We had two weeks before our vacation time, so that was out of the question. Next idea was Switzerland. Still a fair amount of money for what we had planned. Final idea … random road trip to Florida.

We had nine days to travel and lots of things we decided we’d like to see along the way. We slept overnight in Windsor, Ontario and then headed off the next morning for some fun.

First stop: The Creation Museum in Kentucky. We had three hours to fast track through the museum. It was incredible. They had life size figures and tons of interactive information. It drew us in and gave us a different perspective of the beginning of time itself. This is definitely a place I’d like to tour again when we have more time. Hmm … another trip perhaps!

Anyway, we needed to make it down to Gatlinburg, Tennessee that night, so we headed off. We had planned to go to Knoxville or Chattanooga, but heard that Gatlinburg was pretty cool, so we tried there instead. I was shocked when we arrived. I felt like we drove into a mini Vegas of sorts. There was entertainment, museums, and go-kart tracks everywhere. Everything was lit up.

It was ten o’clock at night when we arrived and started looking for a hotel. I didn’t plan anything ahead of time because we weren’t sure how far along we’d get. We thought we’d spend the night there and then drive through the Smoky Mountains in the morning.

Well, poor planning on my part. There wasn’t the cheapest or most expensive place available. Literally EVERYTHING was sold out. We sat in the McDonald’s parking lot debating whether to sleep in our car or drive through the mountains.

It was finally around midnight when we gave up the search and started through the mountains. We thought surely there must be something to stay at on the other side. Another two hours of driving later and we arrived at the Stardust Motel. Sounds so romantic doesn’t it??

Michael went in to pay and get the key. The guy chatted it up with him and found out we were from Ontario, Canada. His daughter lived in Brampton, so he was felt connected to us and was excited to have us join him.

We were thankful to have somewhere to sleep for a few hours. That was until I looked at the window to the room we were about to enter. It was cracked and a dead cockroach laid in the window.

We dared to open the door. The couch leg was broken and leaning. I walked into the bathroom to see that the window had been boarded up. Rust stains streaked the sink and tub. Everything was dark and dingy. I didn’t dare change. I zipped up my sweater and laid on top of Michael, afraid to touch the bed in fear of bed bugs. Needless to say, we didn’t sleep a wink.

We debated leaving right away, but Michael felt bad since the man was so friendly and excited. He didn’t want to disappoint him. So, we laid there until 7:00 am. We grabbed our suitcase and started toward the car when I saw a cockroach crawl on our bag. I didn’t see where it ended up either. We took some clothes out of our bag, quickly changed, and bagged it all up to sit in the trunk until we arrived back home to properly wash it.

We were meeting a friend near Atlanta that day. I text her that we were on our way, we were tired, and would need a hot shower when we arrived. Thankfully she was gracious to allow that along with a much-needed nap before we hung out.

We had a great time with our friend Chelsea and her son Tripp. We explored the Coca-Cola museum (Michael’s favourite pop!). It had fascinating history and taste testing options from around the world.

Then we headed to an Atlanta Brave’s game. It was a lot of fun and made up for the interesting night. It was really good to catch up with our friends as well.

Back in the car the next day, we headed on our ten-hour drive to Boynton Beach, Florida. We had picked a book by Dee Henderson to read to each other to make the drive more interesting. It was a beautiful day for a drive. All the houses were what you’d picture in the south. Men were out sitting on their lawn chairs watching the cars go by. It was peaceful, enjoyable, fun.

We made it down to our friend’s house and were happy to stretch our legs. It was a wonderful reunion. I hadn’t seen them in years, and I was excited for them to meet Michael. They are the kind of people that are friends, but feel more like family. I don’t see them often. Maybe every five-ten years or so, but each time I do is a blessed reunion.

We were able to spend three days with them. They were so kind to give up their bed for us and they slept on the couch. They had four adorable children. It was relaxing and fun. We even tried out a couple’s massage and did some shopping. We made it to the beach one of the days and enjoyed some time just the two of us.

Our friend’s sister lives in Pennsylvania. Being a random road tripper that I am, I hadn’t scheduled any hotels. I asked him to see if she’d be willing to let us stay with her a couple nights from then. She happily agreed, and we headed on our way.

We made it as far as Virginia that night, found another hotel and spent the night. Thankfully this one was decent. So much so I don’t even remember it, but I’m okay with that!

Since we were plotting along the east coast and didn’t have to arrive in Pennsylvania until that night, we decided to take a detour and explore Washington D.C. for the whole two hours we had available.

We briskly walked around the Abraham Lincoln memorial, took a selfie in front of the White House, and observed fighter jets flying over the Jefferson memorial. We posed in front of the Washington Monument and toured the FDR memorial grounds. They were all a sight to see. It was fun taking a whirlwind tour, though this is also somewhere I’d return to, to spend more time properly observing everything.

Since we were running out of time and always up for an adventure, we took a bicycle rickshaw back to our car. Then headed off again to Pennsylvania.

It was wonderful to be greeted by more friends. Their daughters instantly took to Michael and spent the rest of the night entertaining him. It was adorable to watch. We had a lovely evening catching up with them when the kids went to bed.

We were grateful for the place to stay, the wonderful company, and the delicious food. They suggested we stop at the Hershey, Pennsylvania before heading back to Ontario. We had some time in our day, mostly, so we decided to have some more fun.

And fun it was! If you ever have the chance to go, Hershey’s Chocolate Factory is a fun place to visit. Beyond the great shop is a world to be explored. You can make your own chocolate, tour the museum, take a fun little ride through Hershey Land and the amusement park. They have TONS of stuff to do.

After enjoying some of the perks of the place, and filling our cart full of goodies, we jumped back in the car and headed towards the border. Six days of the trip were complete. Now to cross over and enjoy a few more relaxing at one of my parents’ cottage.

We connected with family, got on the boat, and filled our bellies with lots of yummy home cooked meals. It was nice to get out of the car for a bit and enjoy the familiarities of the cottage.

After a few days, we headed back home to our own bed. Nine wild days on the road. Many great faces and adventures, and one not so great. But you’ve got to have one in every story. It helps keep it interesting right?

Where have you gone on a road trip? Any interesting adventures you care to share? 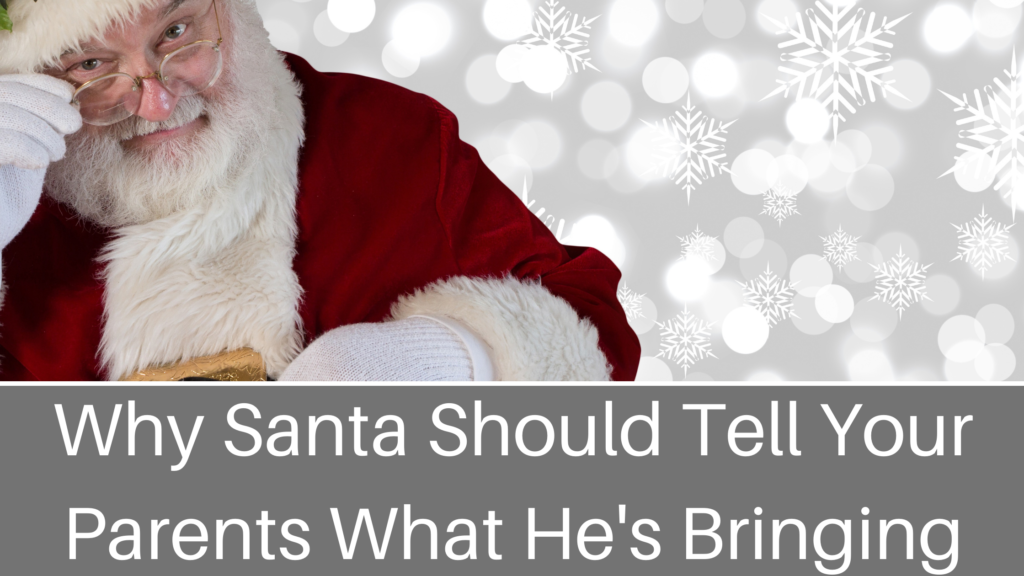 Why Santa Should Tell Your Parents What He’s Bringing 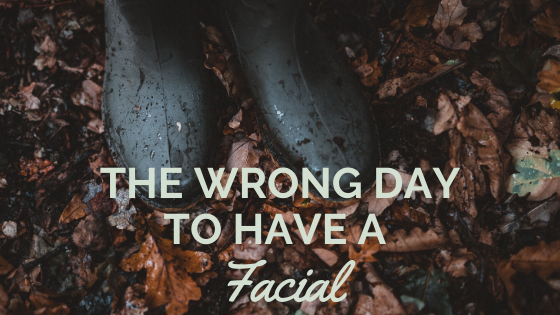