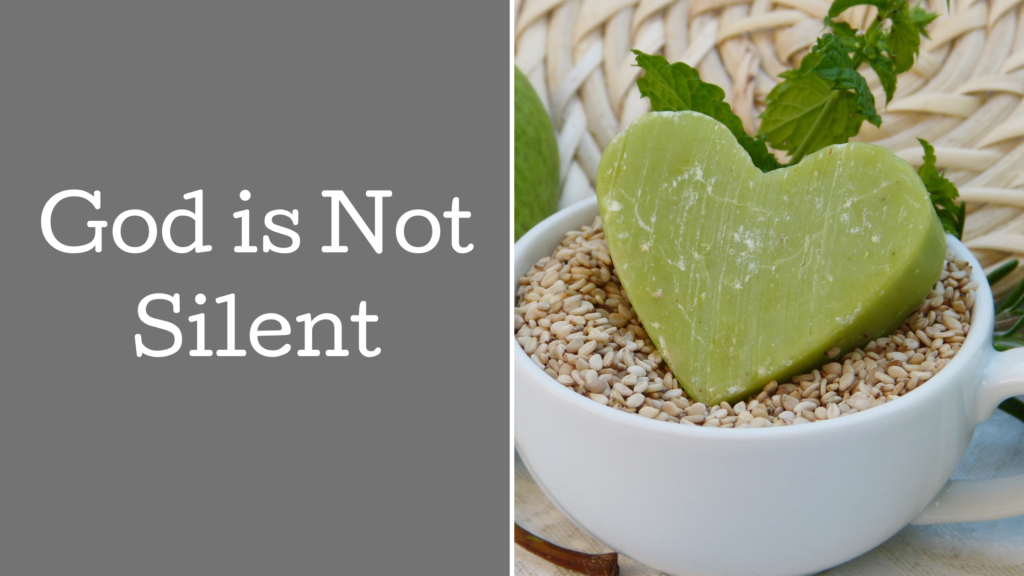 God is Not Silent

The news lately has been overwhelming… Okay, the news the past two years have been. We can feel helpless and lost when there are so many tragedies and we feel like we can’t do anything about them. Sometimes, the hardest part is trying to see where a loving and gracious God is in the midst of all the chaos.

I remember a friend talking to me about Afghanistan years ago when I was exploring which country to serve in as a missionary. I was intrigued about this country because God was present. She had shared that people were having dreams about Jesus and getting saved. They sought out the people they had dreamt about and found our friends in the country to baptize and disciple them.

The Lord reveals Himself even in some of the hardest reached countries. He knows our limitations and steps in so that people of all tribes and nations can hear about Him and find salvation.

“For His invisible attributes, that is, His eternal power and divine nature, have been clearly seen since the creation of the world, being understood through what He has made. As a result, people are without excuse.” Romans 1:20

God makes Himself known when we can’t get to people. He has used dreams and visions in the Bible times and continues to do so to reach our hearts. He is all about loving and protecting His children. Sometimes it does lead to persecution and death, but even in the midst of suffering He is there with His people, being the Comforter and offering the eternal hope and joy that lies before us. This reminds me of the story of Stephen, the first recorded Christian martyr:

Then they screamed at the top of their voices, covered their ears, and together rushed against him. They threw him out of the city and began to stone him. And the witnesses laid their robes at the feet of a young man named Saul. They were stoning Stephen as he called out: “Lord Jesus, receive my spirit!”Then he knelt down and cried out with a loud voice, “Lord, do not charge them with this sin!” And saying this, he fell asleep.” – Acts 7:54-60

Stephen saw Jesus standing. Most of the New Testament records of Jesus after He ascended back to heaven say that He is seated on the throne. Yet, in this account, He was standing. Perhaps it was to show His concern for Stephen. But I like to think that it was because He was ushering Stephen home. Stephen loved Jesus and was faithful in serving Him and preaching the gospel to the lost. In turn, Jesus got up from His throne of peace in honour of Stephen and welcomed His brother home.

Jesus knows the suffering and cost of a martyr. He was one Himself. He has a special place in His heart for those who stand for Him no matter the cost. They are victors for Him and will be rewarded at the end of time.

Though I cannot speak about Afghanistan’s current situation due to the protection of our brothers and sisters serving there, I can say that the Lord is working with them. Hope is not lost and His work not finished for the Afghan people. In fact, it’s in the deepest areas of crises that the Lord is often most seen.

Haiti has been another recent tragedy with the earthquake and hurricane that they are enduring, along with the assassination of their president. They are desperate for help. My heart breaks for them. As many of you know from my previous posts, Haiti left a large impact on my heart. I learned about God’s characteristic of Passionate Lover there. So, my heart is heavy for all that they are going through.

Though they are deeply suffering, I know that God is there too. I still remember the story of the earthquake that happened in Haiti in 2010. It was devastating. It happened a year and a half after I had visited there. I had friends that lived in Port-au-Prince. I tried calling them to see if they were okay, but I couldn’t reach my friend Sammy. No one could. The powerlines were all knocked out. I found out that there was a group from Leamington, Ontario near where I grew up that were there when it happened as well. Fear broke out and I felt helpless. Both my brother and I were looking for flights to Haiti to get down there and help. We didn’t know how to or what we could do, but we desperately wanted to do something rather than sit around, listen to the news reports, and wait to hear from my friends.

They had shut down the airport aside from emergency relief so I couldn’t go. Then reports from our organization’s missionaries started coming in. They shared miracles that could only come from God. I was shocked by what I was hearing.

One of the main cisterns that supplied the compound the missionaries lived in within Port-au-Prince was dried up. The pipe that connected the city water to it was crushed in the quake. This water supplied the compound and the surrounding village which happened to be in the poorest area of the city. The situation was dire. It hadn’t rained that night and there was no way of filling it back up. For some reason, someone decided to check it the next day and it was full! With no rain and no access to the city water, how could it have been full other than by the miraculous power of God?

My friend Sammy finally called me approximately a week after the earthquake. He had been in the university in Port-au-Prince that completely collapsed. I remember hearing about that university on the news. They said that there were no survivors. As Sammy recalled the story to me, he said that he was standing in the stairwell when the earthquake started. The next thing he knew, he was out on the street with no recollection of how he got there; the school left in crumbles behind him. His story is incredible and there is more to it that I’ll have him share some day.

Even though the airport was shut down and only emergency planes were allowed in, they allowed another plane to arrive. It was carrying a ton of Bibles to hand out to people. The plane shouldn’t have been approved. And even though severe looting and riots broke out, the Bibles were safely escorted into the proper hands.

Remember I mentioned a team from Leamington Ontario down there on a short-term mission trip? They had spent the day in southern Haiti at a resort as their last special day in Haiti before planning to fly back to Canada. They were on their way back into Port-au-Prince when the earthquake hit. The sky and ground they were traveling on was covered in dust from the debris. They couldn’t really see where they were going. Eventually they saw a light at the top of a hill and decided to drive towards it. When they reached the house, they realized it was the mission house they had been staying at! The missionaries had a generator and were able to turn the light on in hopes that the travelers could find their way.  They made it back safely and hunkered down there until they could get a flight back home.

These are the stories you don’t normally hear in the midst of tragedy. But I felt the need to share them in order to encourage you. We are called to pray for our brothers and sisters in need. We are to love and help where and when we can. But there are times when the need is far greater than we are able to or too dangerous. This is when we can trust in the Lord to intervene. He will not leave His children. He will be their Comforter. He will meet their needs either by our help or not. Why?

Because He’s still in control.

Because He loves us

Because it’s in those dire circumstances that people look for help and find the Saviour.

Never lose sight of the miraculous, loving, powerful God you serve. He cares about the smallest and the biggest needs. He’s always working, even when you can’t see it. He’ll never give up on you. He loves you.

If you are looking for a way to give support to the efforts in Haiti, please check these two options. They are both trustworthy and reliable. The money will get to the nationals to help their own people.

The other option is through Crossworld, the mission organization I’ve worked with in Haiti and Ireland. Dear friends of mine, the Scheafers, have spent many years serving in Haiti. They now live in Germany but are still highly connected to the ministry and people in Haiti. They have received permission to open a project with Crossworld to support the relief efforts in Haiti. They also have a missionary colleague in Italy who wants to match any donations up to $1,250USD! They are sending the money to Thony, a Haitian national who works with Crossworld. Thony lives very close to where the most damage of the earthquake happened in the south. He and his wife Jenna will be providing family packs of food, prayers, and will be sharing the gospel to these devastated people. If you’d like to donate to this organization, you can go to https://crossworld.org/give. Then in the space provided for the Worker’s Name write: Scheafer/Haiti Relief.

The other option is called Haiti Arise. This is another organization that’s run by nationals to help their own people rise up against poverty and share the gospel. I have good friends connected to this organization that can vouch for their trustworthy and reliable practices: https://www.haitiarise.org/ 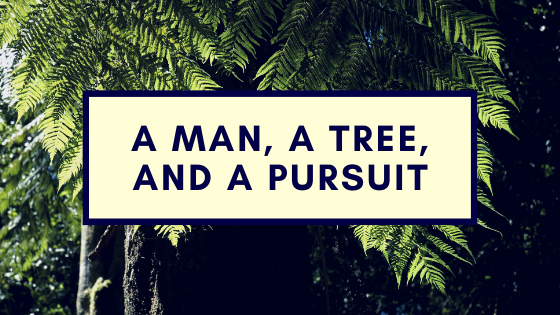 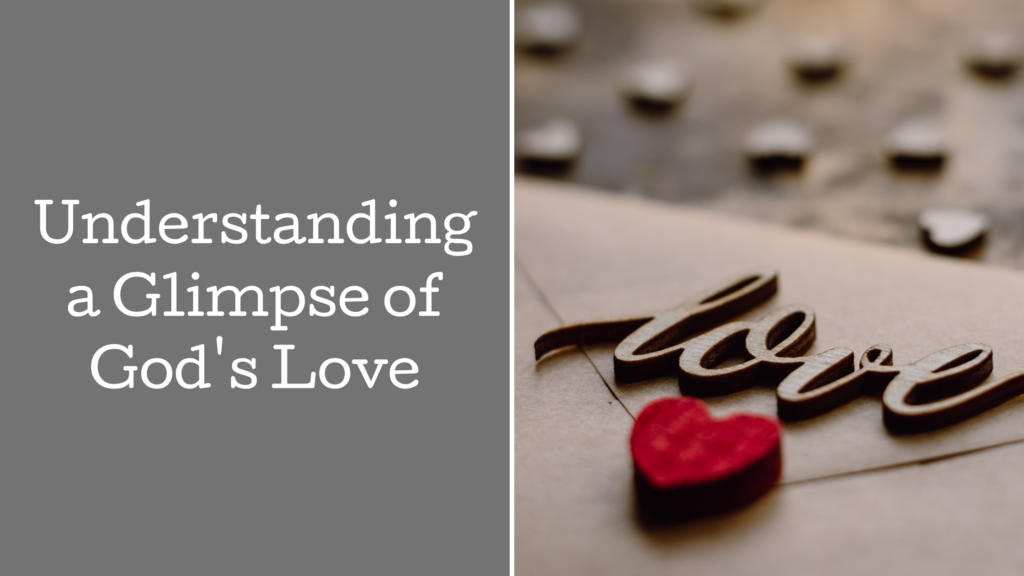 Understanding a Glimpse of God’s Love